Chaired by Prof. Juha Teperi, Vice President of Tampere University, Former Prime-Minister of Finland, Mr. Esko Aho, gave a keynote speech on “Innovation to the future in the light of the contemporary crisis”.

As introduced by Prof. Teperi, Ms. Esko Aho who became the youngest Prime Minister in Finland in early 1990s, just before the recession of economics in Finland, and guided Finland through the economic crisis. After that, he served as the president of the SITRA, the Finnish National Fund for Research and Development. 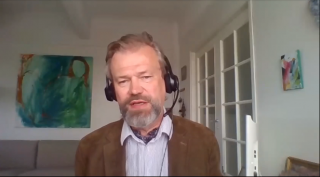 Mr. Aho first described there are two types of innovation systems, i.e. vertical innovation and horizontal innovation. Based on Nordic Welfare State system, the national innovation system in Finland falls into the latter camp. In a horizontal innovation system, it is very important that leadership understand different needs from different actors. All actors need to reach a common agenda for innovation. Hence, he found the concept of Triple Helix Model is very relevant to bring different actors (university, industry and government) together to reach such a common agenda. In this equal, horizontal system, universities play an important role, as it would educate our future leaders in government, business and academics. He also emphasized that innovation takes time. We should be more patient for scientific research and innovation. In association with the current crisis of pandemic,  Mr. Aho indicated that in the Post Covid-19 Era, there can be greater opportunities for Finland to take a leading role in innovation, especially in digitalisation and healthcare.

After his speech, the floor was opened to the audience and several interesting questions were posed and discussed. For example, Prof. Henry Etzkowitz asked, “Could you explain the reasons for the European innovation failure in the smartphone space and how it might have been averted?”. Mr. Aho explained, the major reason is that, different from that in Silicon Valley in the U.S., in Europe, it is difficult to have joint efforts from all European countries to develop a common digital platform to support Nokia’s development, and compete with other counterparts from the U.S. The fall of Nokia was related to a lack of  synergized digital platform in Europe.

Interested to see the whole session, you can watch it HERE.