The final activity of the International workshop of socially responsible entrepreneurial university was a scenario planning game based on the triple helix.

This session was based on this strategy game for scenario planning, which followed the topic of management of Intellectual Property Rights (IPR) and technology transfer practice. In the first part of the session, Prof. Emanuela explained how this scenario game is normally played. It involves imagining the future and role-playing. The participants should imagine what actors and factors will be at play in the future regarding IPR and technology transfer as well as what the main challenges will be. Role-playing will occur because participants are supposed to base their stands on six different characters, represented by different hat colors. 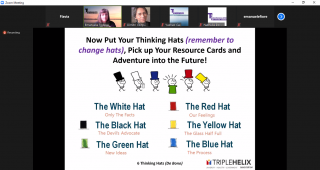 The hats presented by Prof. Emanuela to represent participant’s attitudes in the game

Since the game had to be adapted to the online conference, the other scholars and professionals in the panel prepared their own takes on the scenario game and presented it to the audience, who later joined the conversation. Dimitri Corpakis on his scenario development highlighted the importance of IPR and the need for universities to educate their community on the topic. Dr. Emanuele Fiore added that in his scenario collaboration would play a key role. For Michele Coletti, in the future sustainable development and free innovation paradigms will play crucial roles. György Kovács highlighted, within the topic of IPR, the importance of intellectual property offices to target abusive patenting practices and other unhealthy IP practices.

This session was probably the one that suffered more adaptations to be possible in the online format and this effort made it possible to generate a fruitful discussion and simulation of the scenario game. At the end of the session, Prof. Emanuela Todeva encouraged participants to try similar scenario games in their institutions and study groups.