Tampere (population 220,000) is a city in Pirkanmaa, southern Finland. Tampere is located between two lakes, Näsijärvi and Pyhäjärvi. Since the two lakes differ in altitude by 18 metres (59 ft), the rapids linking them, Tammerkoski, have been an important power source throughout history, most recently for generating electricity. Tampere is dubbed the “Manchester of Finland” for its industrial past as the former center of Finnish industry.

Tampere was founded as a market place on the banks of the Tammerkoski channel in 1775 by Gustav III of Sweden and four years later, 1 October 1779, Tampere was granted full city rights. At this time, it was a rather small town, consisting of only a few square kilometres of land around the Tammerkoski.

Tampere grew as a major market town and industrial centre in the 19th century. During the latter half of 19th century Tampere had almost half of Finland’s industrial labour.  After World War II, Tampere was enlarged by joining some neighbouring areas. Messukylä was incorporated in 1947, Lielahti in 1950, Aitolahti in 1966 and finally Teisko in 1972.

Tampere was known for its textile and metal industries, but these have been largely replaced by information technology andtelecommunications during the 1990s. The technology centre Hermia in Hervanta is home to many companies in these fields. 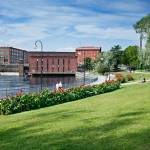 Tampere is an important railroad hub in Finland and there are direct railroad connections to, for example, Helsinki, Turku and Turku Harbour, Oulu, Jyväskylä and Pori. The Tampere railway station is located in the city center. There are also frequent bus connections to destinations around Finland.

Tampere is served by Tampere-Pirkkala Airport, located in neighboring municipality Pirkkala some 13 km (8 mi) southwest of the city. The airport serves more than half a million passengers each year.

The public transport network within Tampere currently consists exclusively of a bus network. Between 1948 and 1976 the city also had an extensive trolleybus network, which was also the largest trolleybus system in Finland. As of 2009 plans are being made for construction a light rail system in the city to replace some of the most popular bus lines, as well as initiating commuter rail service on the railroad lines connecting Tampere to the neighbouring cities of Nokia and Lempäälä. 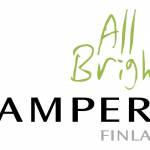